The Most Beautiful Places in Iran 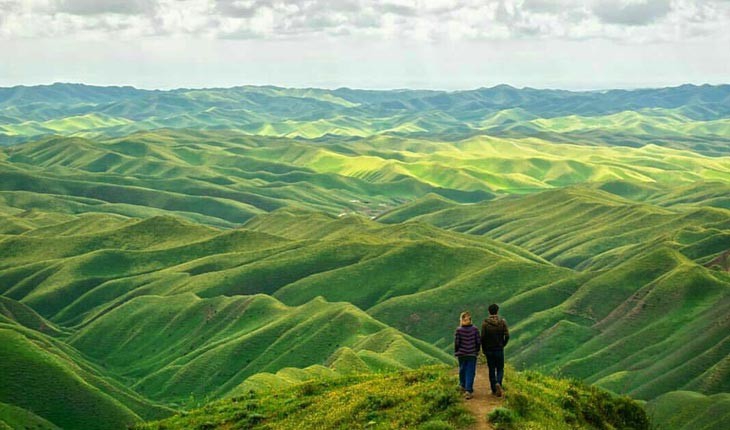 Maybe it’s good to know that some natural places in Iran are so attractive that you cannot find any similar place in the world. This magical nature has attracted the attention of many people around the world so the tourists in this country can enjoy their time in the magical nature of the old country. Now we try to introduce you some most beautiful places in Iran tour .

This is one of the stepwise lakes located on the height of 1841 m which is a unique piece of natural art in Iran. This a lake  containing many layers such that every year many people come to visit it. For those who are interested in ecology, this would be a wonderful chance. This lake is located 100 km away from the sari city. The lake is multi-layered and has many colors e.g. gold, yellow, orange and red. The stepwise lakes are only in some spots on the planet and this one is one of the most beautiful lakes among them. 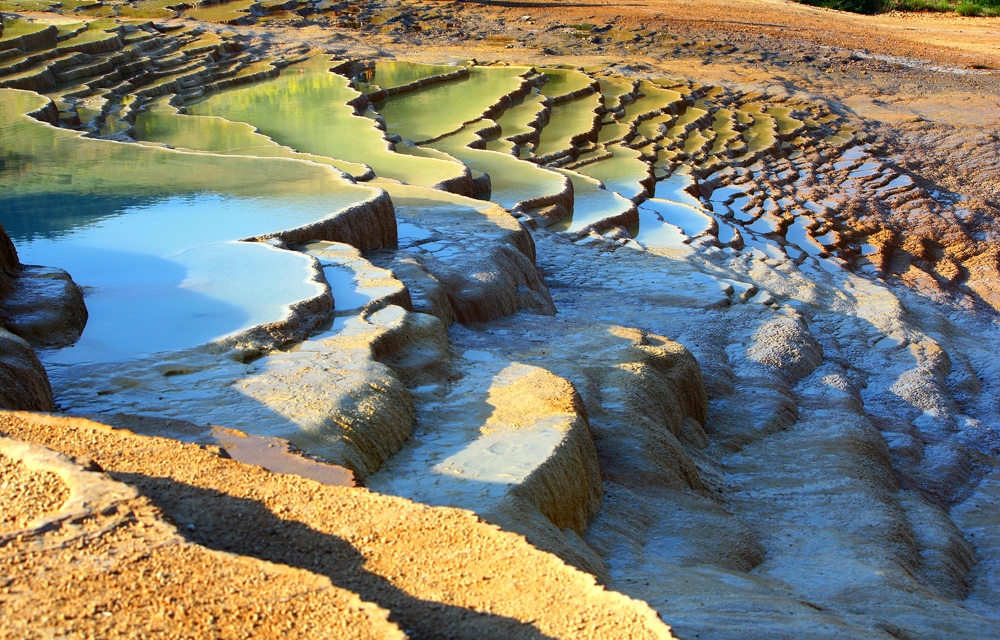 Is some parts of the Mazandaran and of the height 1034 m from the seas there is one piece of nature called the “Chort” or “Mianshe” Lake. It is known as a sibling to the Khazar sea. This lake has the total vastity of 2.5 hectares and is close to a village called by the same name. what makes the Chort somehow different is not only being in the middle of a jungle but also the way it is created. On 1318 there were some earthquakes closed the river path and finally a lake was shaped on the hills of a mountain with a sharp slope. This is a natural lake and it was not due to a dam constructed. The depth and the length of the lake is changing during the year and its geometric shape is elliptical and its maximum length is 380 and 140 meters. This is one of the attractions of the area and attract many tourists to this area. 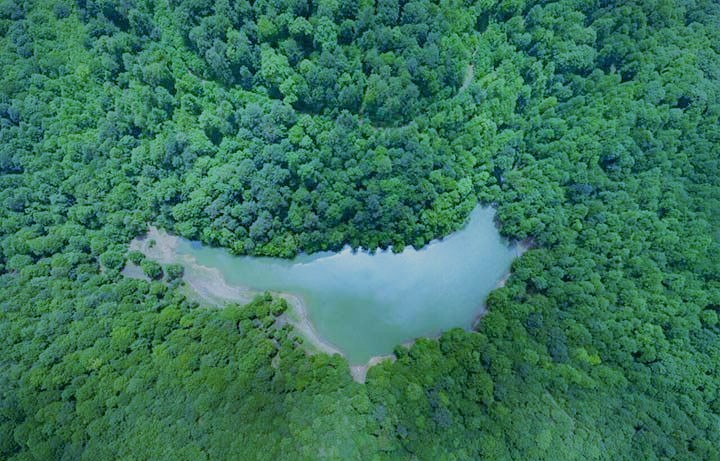 The Margun waterfall is in the west side of the Ardakan (Sepidan) which is an unprecedent natural view. A waterfall of the height 70 meters and 100 meters of width is one of the biggest waterfalls in the country. This waterfall is competing with another one in Dezful in terms of the amount of the water and height. The waterfall is rather special due to some other reasons as well. On the top of this waterfall there are some lakes such that the waters roll from them at high speed. It has been said that this waterfall is one of the biggest in the whole world. The majority of the water is coming from the middle and makes a river which is continuing all the way to the Ardakan and finally gets connected to the Komehr river. 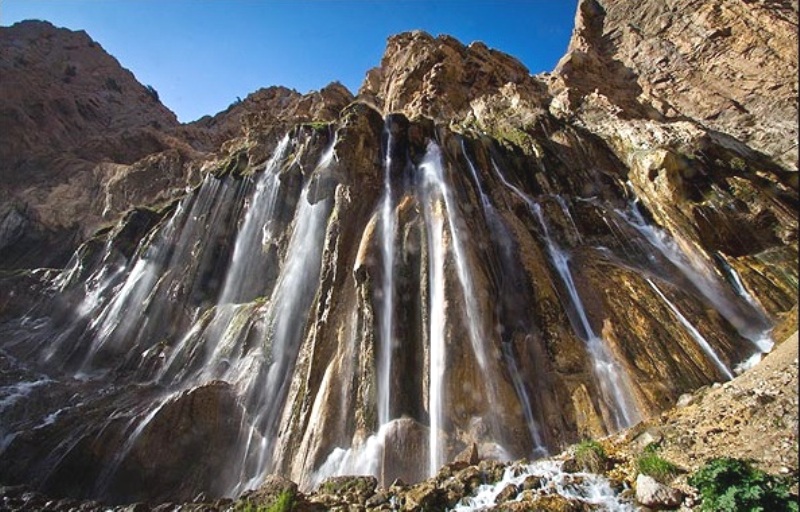 The star valley in Qeshm

What is known as the valley of stars is a natural phenomenon in the heart of the Qeshm Island with 15 meters depth which would make the people wonder. The nature in the south Iran close to Khalaf lake has an amazing ecologic feature. Once you pass the village, to enter this mysterious valley, you will find yourself surrounded by the statues and the more you enter the valley the more you get astonished and the silence will fill up your whole moments.

The features and the sightseeing of this valley makes this piece of nature a part of the geo-park of the Qeshm which is registered in UNESCO. which is an honor for the country as well. 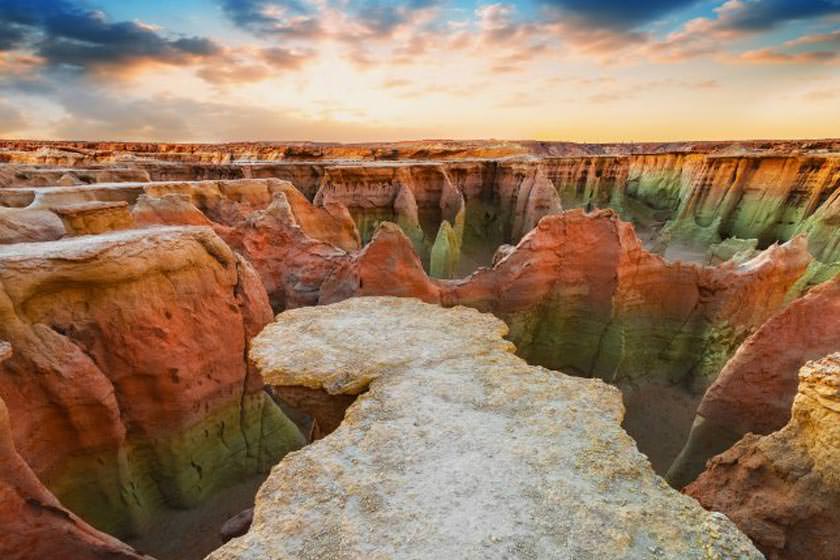 The Nasir-Al-Molk Mosque in Shiraz

This is one of the few mosques in the world that has a unique inner design with colored glasses which has turned this place into a unique one. The sunshine is being reflected through these glasses and make a unique scene. This would make the world inside the mosque look like a jewelry box. Actually, the nickname to this mosque is really matching with the structure: “The pink mosque”. This 19th century masterpiece owes its fame to the great tilework which is a red like color and make the mosque space more pleasant. 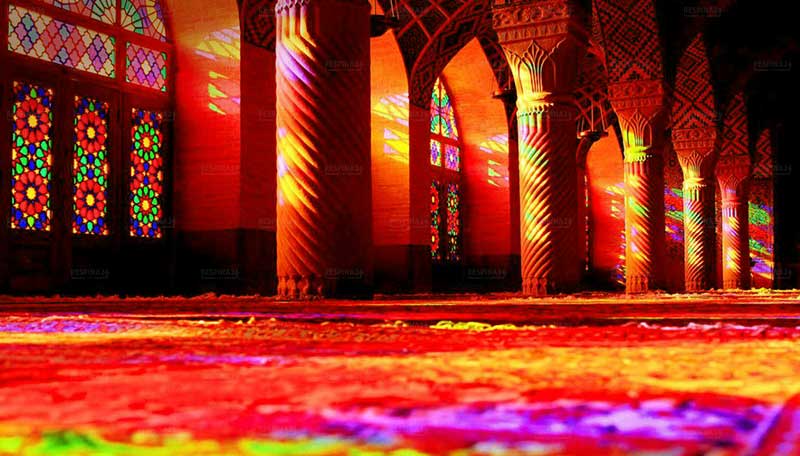 The Roud Khan castel of Gilan

Over the top of the heights of the Fouman, there is a historical place from 665 to 715 meters high from the seas. This place called RoudKhan castle, Roud khan fortress or Hessami castle. It is the biggest brick-made castle of Iran and is located in Roudkhan forest park.

This place belongs to the Seljuks era and makes your visit a unique one. This trip will make you walk for a long time and so you will be compelled to visit its wonderful nature. Visiting this castle could be an ecotour and historical tour for you at same time. On the right side of the castle there is a river by the same name streams from the north to the south and makes the life possible here. When you cross this jungle, you have the chance to see the people, shop and have fun moments. The shops and the centers there and the existence of more than 1000 steps makes this place a unique one.

The castle is a mixture of intelligence, defensive architecture. 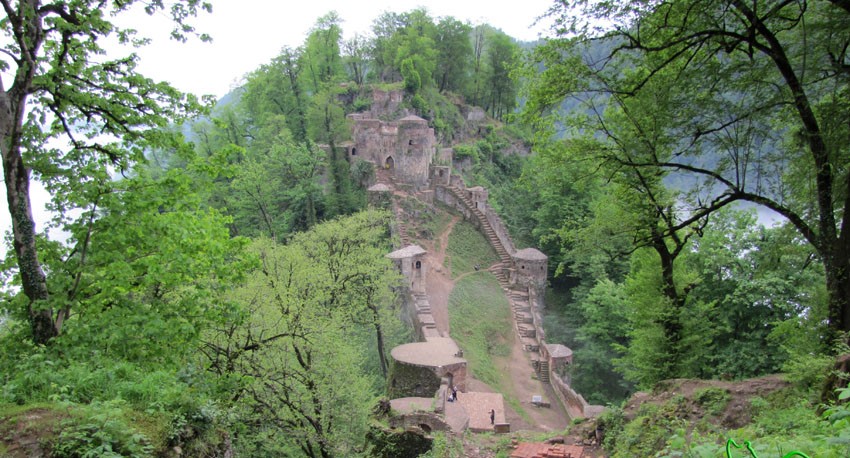 The Vakil bathhouse in Shiraz

This bathhouse is a compelling example of the architecture in the Zand era and is being made under the command of Karim Khan Zand as a public place. The place is known for the architecture and the way it’s being made. There are 30 statues in the bathhouse which show the life of the people in the past.  It covers an area of 11000 square meters and has 8660 meters of basement of a width and height of 80 ,120 meters respectively. 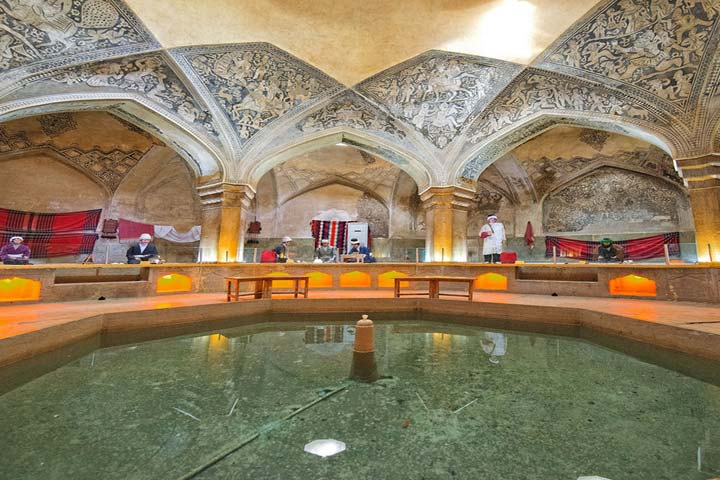 The church of ZurZur in Maku

Close to the city of Maku, and close to a village called Barun, there is a temple which is being absorbed in the silence and each part of it has a history of its own. It is located on the entrance of the valley where the ZangMar river is crossing. The name of the church is officially The Holy Maryam and is known by ZurZur.

The outer side of the church is so simple but amazing. So, it has been registered in the national list of the historical places. 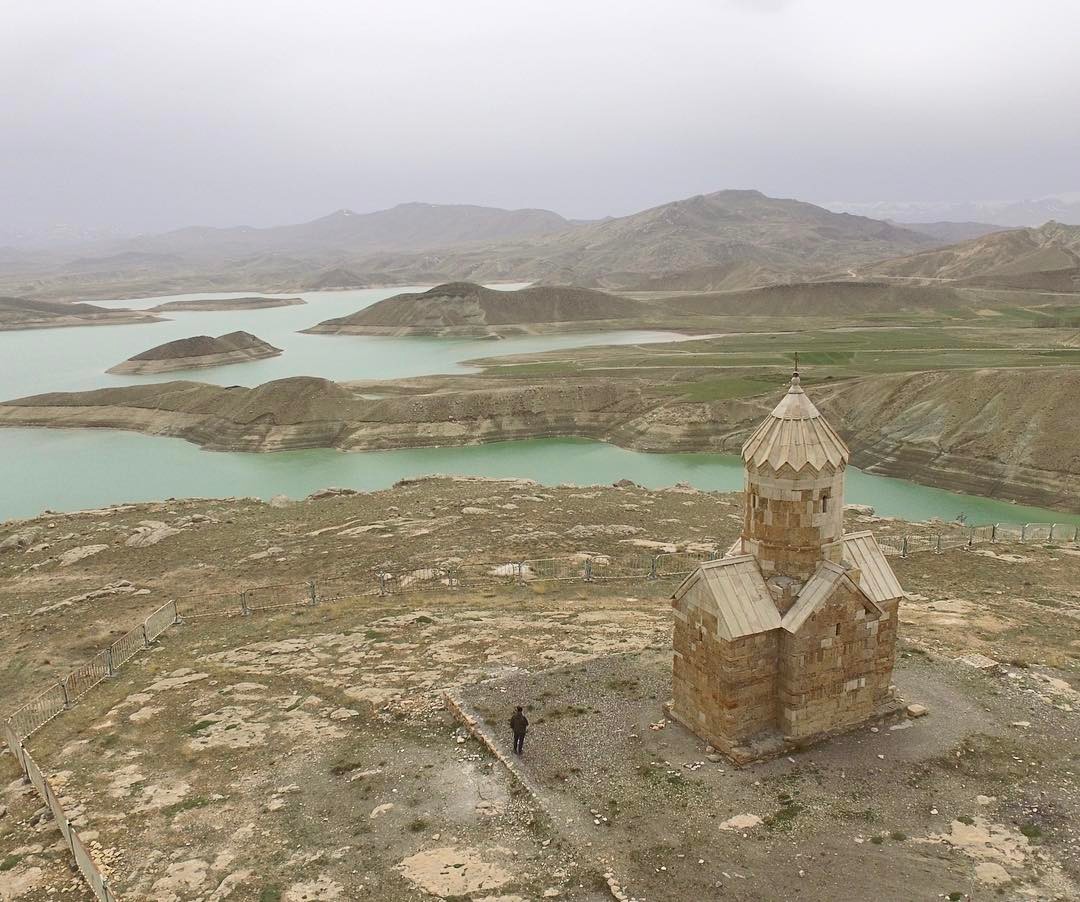 The museum of water in Yazd

In the north part of the Amir Chakhmakh and on the beginning of the Ghiam street there is a museum which is called “water museum”. Somewhere you can find many places and historical buildings and know about this land a bit more.

What makes this museum different is a river passing from the middle of it. This river is a source for water of the people living there.

In these five floors museum you can see many different subjects concerning water and the way people in the past were obtaining and using it. 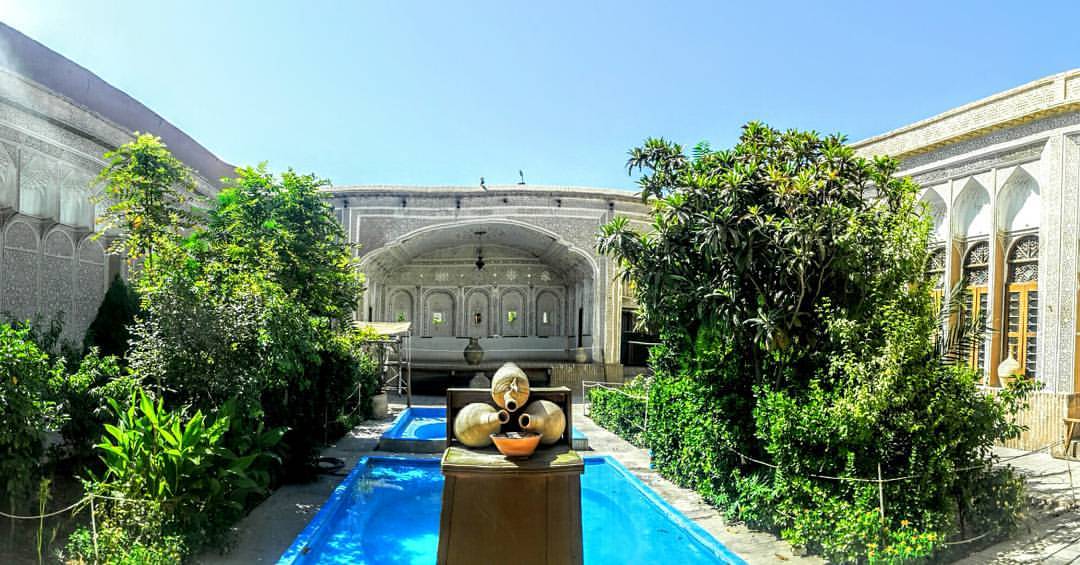 The cemetery of Khaled the prophet in Gonbad e Kavoos

This cemetery has a total vastity of 12 hectares and 90 km away from the Gonbad e Kavoos is one of the highest areas of the place. It’s been said that the cemetery belongs to the era after Sasanid dynasty but there is no consensus about the history of the cemetery.

There are three temples in this cemetery naming Ata the shephered, Khaled the prophet and Alem Baba. It’s been said that Alem was the father in law of Khaled and the Ata was his follower. What makes the cemetery different is the shape of the cemeteries stone.

There are three main stones in the cemetery the first of is the vertical one which were representative of the people with the hamlet on the head and wear something on their wrist.

The second is woman like stones and are directed towards the north which shows that the buried person was a woman.

The stones which are like the goat which are sacred according to Turkmens. this cemetery is in a beautiful nature which is called a thousand valleys which is more interesting on spring. 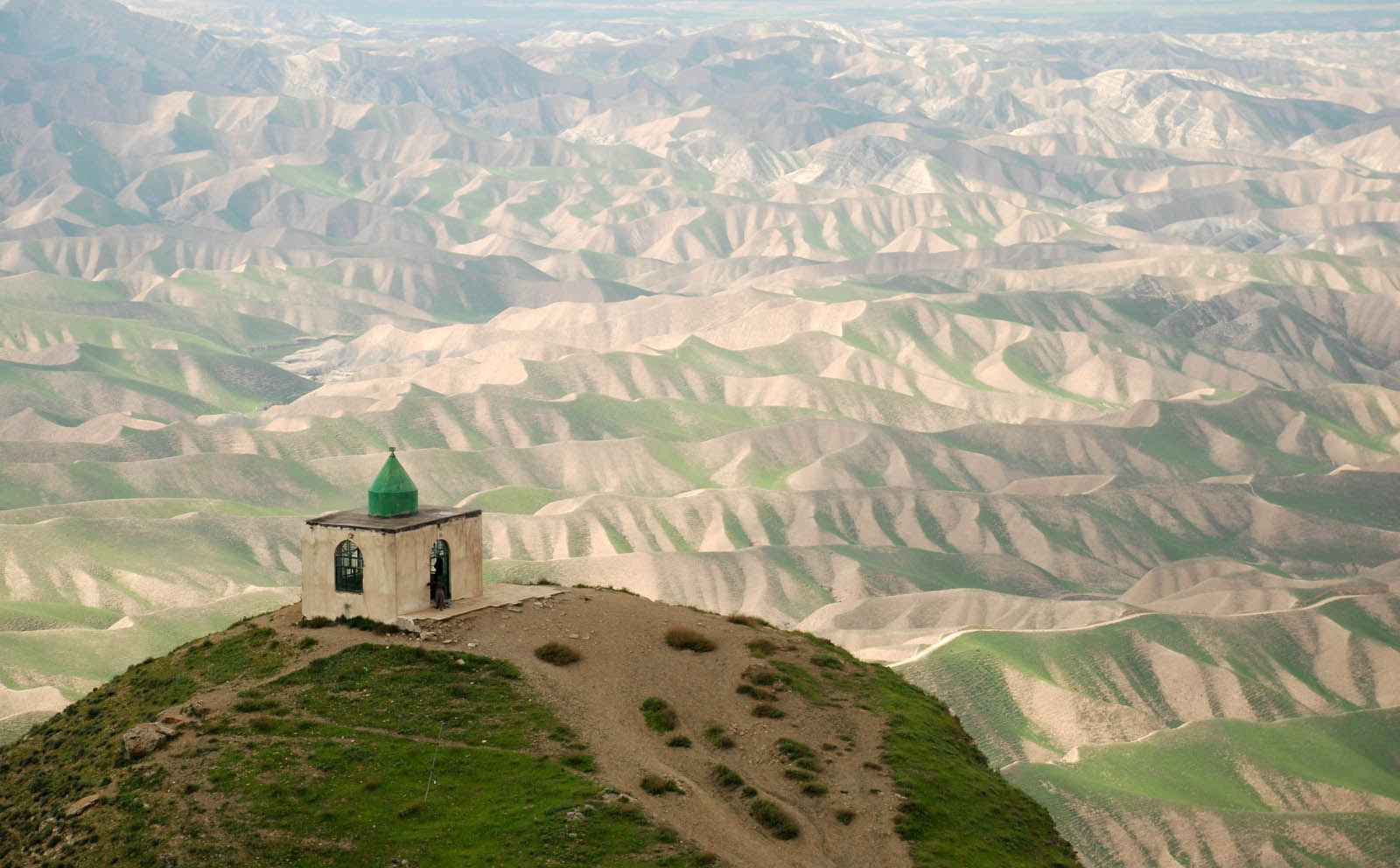 The Lout plain in KermaN

The “lout plain” also mistakenly known as “Lout Desert”, is the first biggest wild land of the south west of the country and is an over warm area of the world. The desert is located between three different provinces: Khorasan, Sistan and kerman and contains 10 percent of the Iran. It is being known for several years as the hottest spot on the planet.

This is one of the most difficult impassable places of the world and in some areas, there are no living creatures there.

There are three parts in this desert

-The northern Lout which is being made of sand and rock.

-The central Lout which is an amazing part of the desert containing distinguished phenomenon’s like kalout and the big masses of sand there.

-The southern Lout which is the richest plant covered part of the desert.

This desert is being registered at UNESCO as a plain and not a desert despite the common belief about it. 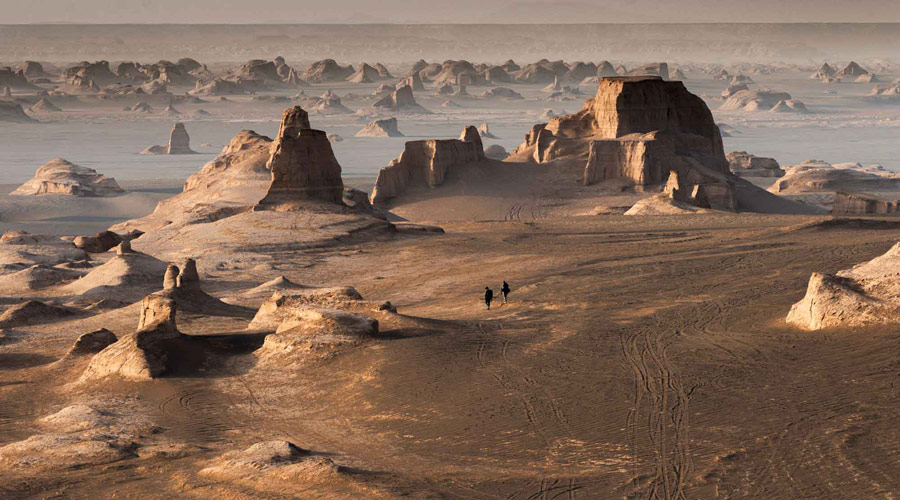 Iran Tour Operator is very important for having the good travel .s-travels has the best tour operator in Isfahan.