Qeshm Island is in the Hormozgan province and is the biggest Iranian island and the biggest one in strait of Hurmuz which is larger than 22 countries in the world. This is the first middle east geopark registered in the Global Geoparks Network (GGN) and it's famous for the same reason among tourists.

Qeshm has a long history which dates back to Sasanid dynasty. The population is 148,993 people which are mainly Sunni, while there are a minority of Shia Moslems as well. They speak with Bandari dialect that is a mixture of Persian, Indian, Bandari and English. People are mostly fishermen, ranchers, farmers and traders.

The ceremonies and the rituals are extremely important for island habitant. They hold these ceremonies in a glorious way. Besides the rituals, there are some special ceremonies holding there among which one can mention Zanbil Gardani, singing for birthdays, prayer Qiblah and the Nowruz Hunter which is one famous ceremony there holding around mid-July. This is a ceremony with more than 6000 years history and of great importance between the fishermen.

Among the most attractive tourism attractions we can mention Qeshm’s Geo-park, Hengam Island, The stars valley, strait of Chahgou, Harra Jungle, Laft village, and the Hormoz Island. Moreover, there are a lot of water entertainment and shopping centers you can enjoy.

Qeshm Island is a wet and warm area with high humidity. The average temperature in the island is 26 ℃ with a max of 33℃ and min to 18 Degrees. From the 1st of June to the 1st Septembre there is the warmest weather and from 22nd December to 19th February is the coldest period with a max and min degree of 46℃ and 16℃.

Overall, we can say that the island's weather is quite nice and while approaching the spring, the weather gets too warm and by the beginning of the October weather gets better so it’s the best time to visit the island. One of the amazing scenes in the winter is watching the dolphins playing in sea.

One of the most important places to visit in the city is the Imam Gholi Square which contains many restaurants and coffee places and shopping centers.

Taxi: Qeshm transportation is different from other cities of Iran. As it’s a small island, the transportation system is limited to taxies. Linear taxies are not common and the services are often provided hourly, which costs about 250,000-350,000 (2019) Rial per hour.

Airport: The airport of the Qeshm is located near the Direstan village and contains 12 lines of airline.
You can easily get access to the taxi whenever you prefer.

Train: It’s true that there is no railway inside the island, but you can go to the Bandar Abbas railway and get yourself to the Qeshm via the fast boats. These boats take off every twenty minutes and you can use the vehicle lifters in the Pol port as well. This is a 22 km way and it takes about 40 minutes to go to the destination.

Bus: Maybe it’s strange to know that there is a coach station inside this Island, but Qeshm has a terminal with the vastity of 18000 square meters which takes the passengers to the different cities in Iran like Shiraz, Isfahan, Boushehr and Tehran. These Buses are getting inside the island via Land craft boats from the khamir port and Laft port to the Qesm. There is no transit bus in this city.

Maritime Transportation: To commute to Bandar-Abbas or other islands the only way is sea. Ships and boats are ready to transfer people, cars, goods and etc. to other islands. 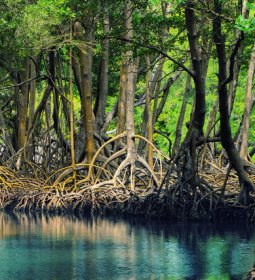