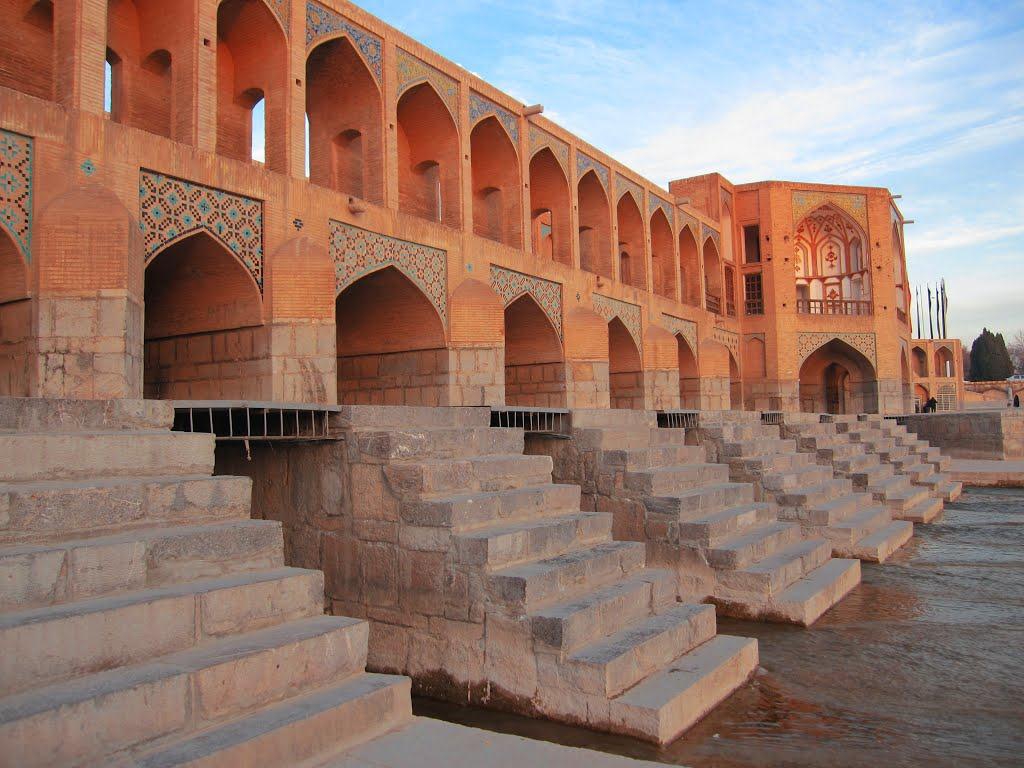 , is one of Iran’s historical bridges. (

, one of Iran’s historical bridges was built around 1650.)

Beside transportation, the bridge was also place for social gatherings. It has two levels. The upper level is mainly used for transportation and the lower level, with a fantastic architecture is a sociable place.

(Sisters in the world) The bridge inspired Putra Bridge and also most like that bridge in Spain.

is one of the finest example of Persian architecture of Safavid Period with ornate/beautiful artistic tiling and octagonal pavilions. Since then, for more than 350 years, Khaju Bridge has been one of the landmarks of Isfahan.

The bridge was built by Shah Abbas II about 1650 AD, to link the Khaju quarter to an old cemetery and Zoroastrian Quarter. According to the king’s order, a little resort was designed for the time of hunting. There is a pavilion in the center of the structure that Shah Abbas (King Abbas) has once sat on and admired the view. Traces of the original paintings and tiles that decorated its double arcade are still visible. There are rooms at both side of the bridge to protect the king and the bridge.

It has 23 arches with a length of 133 meters and width of 12 meters. The bridge passway is 7.5 meters wide and this two-storey bridge is made of bricks and stones. It is good to mention that it has 21 larger and 26 smaller inlet and outlet channels. Notably, the stone pieces used in the bridge are 2 meters long. They repaired the bridge in 1873.

In old times, with adding the timbers to the structure, the bridge was turned into a small dam; it made small pond behind the dam and a place for creation.

On festivals, the arches of the bridge were shut by wooden boards. This raised the water surface and turned Zayenderud River to a lake reflecting the lanterns and fireworks; and Khaju Bridge tolerated the weight of the entire lake.

Khaju has 24 pointed vaults with domes as well as two guardian’s sculptures. There are two lion sculptures at both sides of the bridge, called guardians. The lion eyes strangely shine at the night. Locals believe that the fine carving of lions reflect the moon light.

The symbols on the stones shows that cultural exchange between Persians and Romans. The bridge has been repaired several times within the past four centuries. During the world war II which the city was not rich enough, the bridge was repaired by tomb stone.

By taking a look at the stones at lower levels of the bridge, one can find peculiar signs or signatures carved by masons of the bridge. Some believe these signatures were carved to determine the amount of work accomplished by each mason, to be referred later as a basis of payment.

Others maintain that the signs are derived from the Greek alphabet. In the Jey district of Isfahan there are the remains of Sassanid castles built by Greek masons. In Safavid times, the stone blocks of the castles were removed from their original place, transferred to the river side, and used as construction material for the bridge.

Turning into a Rendezvous

The bridge is as much a meeting place as a route for commuting. At nighttime, people gather to rest, relax and sing. Arches reflect the voices in a fine way. This feature encourages people to sing Nostalgic songs, mainly about love and life. Those with most convincing voices (or indeed songs) attract large crowds.

Arthur Pope was an American expert on Iranian art and the editor of the Survey of Persian Art. He fell in love with Persian arts and according to his will, with his wife, buried near the bridge. Their tombs are architecturally fantastic. Among numerous Arthur was chosen Khaju Bridge as he pointed out:

“The culminating monument of Persian bridge architecture and one of the most interesting bridges extant…where the whole has rhythm and dignity and combines in the happiest consistency, utility, beauty, and recreation.”

Where to Eat near Khaju Bridge

Where to Stay near Khaju Bridge

Parsian Suite Hotel, Pol and Park Hotel, Espadana Hotel, and Melal Hotel are right across Khaju Bridge. Tourist Hotel, Parsian Ali-Qapu Hotel, Pars Hotel, and Sheykh Bahaei Hotel are some of the other nearby hotels on Shams Abadi Street. Khaju Hotel is a great 4-star hotel where you can enjoy your stay near Zayandehrud River.

Due to sluice gates under the archways over the river, it regulates the water flow in the river. When the sluice gates are closed, the water level rises, so it facilitates the irrigation of many gardens along the river. Notably, the lower level of the bridge is accessible for pedestrians and is a suitable shady place for relaxing.

The pedestrian level of the bridge makes a vaulted space within arches that make it a microclimatic condition. So that weather flows and produces a cool climatic condition. The stepped cascade for enhancing the effectiveness of the flood control is on the western side of the bridge. People also gathered there together to do their laundry or meet with each other due to the coolness of the flowing water.

Today original paintings and beautiful tilework are available on the bridge. Additionally, the bridge is still working, although it’s been 350 years after its construction. It functions as a recreation center, social exchange and culture. The amazing arches inside the bridge catch everyone’s attention right at the first sight, especially at nights when they are decorated with luminous lights.