Kashan, An Overlooked Gem of Persia

Kashan is an old and beautiful city in Iran which is located 220 km away from Tehran. The city is located between the Karkas mountains and the central desert of Iran which has a dry and hot weather. Despite the dry weather, the smell of rose flowers are all around the city. Kashan is known as ‘the city of believers’ (Dar-ol-momenin) and the cradle of Iranian civilization and culture.

Some believe that the name Kashan has been taken from the "Kay Ashiyans" meaning the position of the rulers, another group consider the meaning as the summer houses made with wood and straw. Some others think that the name of the city comes from ‘Kashi’ (meaning ‘tile’) because of making great quality tiles there. Finally, some think that the name comes from ‘kasian’ which is a name for a tribe who were living there and during years the name has been changed to ‘Kashan’.

Kashan's population is 304487 which is 97 percent of the population of the whole Kashan province. They speak Persian with a Kashanian accent. One of the cultural characteristics of the people of Kashan is the importance of religious occasions to them, indeed, the oldest documents show that the city was Shia Muslim from the early years.

The city is known as the city of historical houses and the house of Tabatabaei, which due to the beauty in it is called the bride of the Iranian houses, is located in this city.

In Kashan and around it, there are different ceremonies, each of which is rooted and performed for a particular reason. Namely, Rose Water Making (Golab Giri), Rolling Flower (Gol Qalthani), Palm Turning (Nakhl Gardani) and Carpet Washing Ritual, which has been registered on Global List of Intangible Cultural Heritage.

Considering the geographical situation of the Kashan, it is inclined to be dry and warm. Overall, the best season to visit the city is from early April to early June which is the time of Rose Water Making ceremony (with an average 22 C) and late September to late October (with an average temperature of 20 C).

The average temperature of the city is 26 C with the lowest degree of 12 C. This is a desert city and this feature causes hot summers and cold winters. Late June to mid August, with a minimum and maximum of 25 and 41 degrees respectivelyare, are the warmest time in the city. The coldest time is from early January to early March with an average temp of 5 degrees and min and max of 0-10 degrees respectively.

The historical places of the city are located between Kamal-ol molk square and BabaAfzal avenue, which can be easily accessed through the old market of Kashan and there are some other places around such as, traditional houses, main mosque of Kashan and etc.

Airport: Kashan airport is located 12 km away from the old road of Natanz. The flights are just to the Holy Mashhad and there are some formal flights to Tehran and vice versa.

Railway: Kashan is connected to the main lines of Iranian railway system, and being located in the middle of the main lines from north to south and east to west is considered to be one of the most important lines in the whole country. All trains passing from Tehran to Bandar Abbas, Tehran to Shiraz, Tehran - Yazd, Kashan - Mashhad stop in this station. It is located in Ayatollah Yasrebi avenue in Mulla Sadra boulevard.

Terminal: Many of the transportation companies in the country have an office in Kashan’s terminal so you can get your ticket there and move to the station.
Different companies support trips to Amol, Arak, Orumie, Isfahan, Andimeshk, Ahvaz, Babol, Anzali, Tabriz, Tehran, Khoran Abad, Rasht, Zanjan, Sari, Shiraz, Ghazvin, Ghom, Lahojan, Gilan, Mashhad, Malayer, Nahavand, Hamedan, Karaj, Kermanshah, Gorgan and vice versa.

Bus: Transporting with a bus is the best way to move inside the city easily which is safe form the traffic jams inside the streets. The buses have access to all parts of the city containing Phase 1 Naji City, Ravand, Basij Square and to 15 khordad which is the main station there.

Taxi: In Kashan all the streets have taxi services which are designed for the passenger’s safety and they are supervised by the Taxi driving organization in the country. 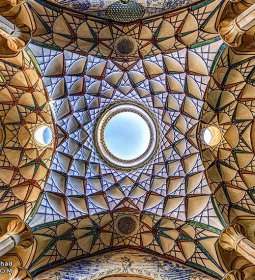 visit the wonders of IRAN