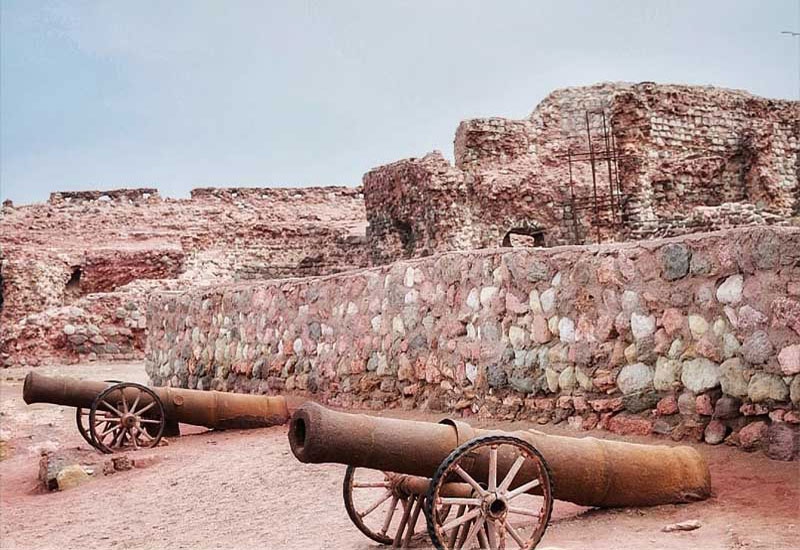 Known as the largest island in the Persian Gulf, Qeshm Island lies close to the strait of Hormuz with amazing rocky coastlines and natural wonders. The island also has some fantastic historical attractions, including a wondrous Portuguese castle. The castle is located on the northern side of Qeshm Island. It was constructed by Portuguese occupying-forces in the 16th century.

In order to dominate the strategic seatrade route between India and Europe, the Portuguese built several castles in the islands surrounding the Persian Gulf. These castles had very similar architecture and were mostly used to defend against local people’s riots. They controlled the Islands for about 110 years and their dominance was eventually ended by the Safavid King, Shah Abbas I (1571–1629).

The castle is built mostly using plaster and limestone and covers an area of more than 2,000 m2. Each corner of the fort is guarded by a sturdy tower. These towers housed some of the most powerful weapons of the day, trebuchets and cannons. The well preserved remains of the multi-ton, brass-cannons can be seen along the castle’s defenses.

In fact, the castle was used as a place for keeping munitions and weapons to support the other castles throughout the Persian Gulf. The castle also served as the command headquarters for the stationed Portuguese military officials. During excavations of the surrounding areas in 1999, an old tunnel was found on the Island. The researchers through the tunnel was simply a munitions cabinet, but were later shocked to find the the tunnel led straight into the castle, serving as an escape route for high ranking officials.

Throughout the centuries, the castle has been damaged several times during wars and rebellions. Nevertheless, the current remains of the castle, with its mysterious and deformed architecture, serve as a testament to its former glory. The delightful views and crisp, tropical climate of the Persian Gulf adds more charm to this historical attraction.Qeshm Tour is consist of a lot of historical visiting for example Qeshm Portuguese Castle.